February 08, 2023
Home News Final conference on the project “Fight against Torture and Impunity” 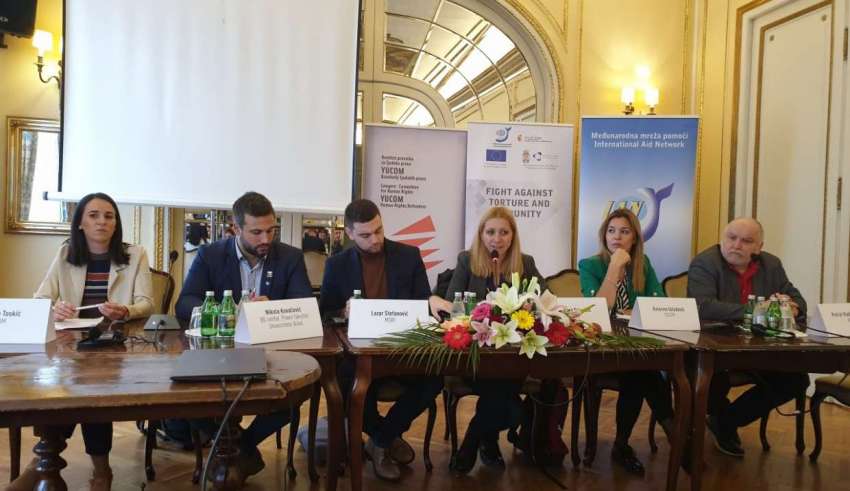 On Wednesday, November 20, 2019, the Aero Club in Belgrade hosted the final conference on the project “Fight against Torture and Impunity”. The project is implemented by IAN and YUCOM and is financially supported by the Delegation of the European Union to the Republic of Serbia and the Office for Cooperation with Civil Society of the Government of the Republic of Serbia. The project duration is two years and is realized in the period December 2017 – November 2019.

The final conference on the project was an opportunity to bring together all relevant actors working in the field of torture prevention, combating the impunity of the perpetrators and rehabilitating the victims, three key aspects in the fight against torture to which the project itself relates.

The conference opened with the premiere screening of the movie “Reminiscence”, a result of this project, in which IAN clients, victims of torture, inhuman and degrading treatment, shared their experiences and reminded society of the horrible and inhuman origin of this deed and the lasting consequences it leaves behind, to survivors and their family members.

The two panel discussions were followed by eminent experts in the field of protection of human rights and protection of persons who experienced torture, as well as representatives of donors and institutions. A concerted effort to achieve the ultimate goal was presented – a society without torture, a society where the perpetrators are punished and the victims recover.

During the first panel, the audience was addressed by Biljana Petrovic, Executive Director of IAN; Una Kelly of the Delegation of the European Union to the Republic of Serbia, John Andrew Young of the UNHCR Office in Serbia; Svetlana Velimirovic, Commissariat for Refugees and Migration; Dusan Pokusevski, Belgrade Center for Human Rights; Silvija Panović-Đurić from the Council of Europe Office and Prof. Dr. Djordje Alempijevic, a member of the European Committee for Prevention of Torture CPT and professor at the Faculty of Medicine.

The conference was attended by over 70 participants, and great interest was shown by the employees of the prisons.

“No one puts their children in a boat unless the water is safer than the land.”…