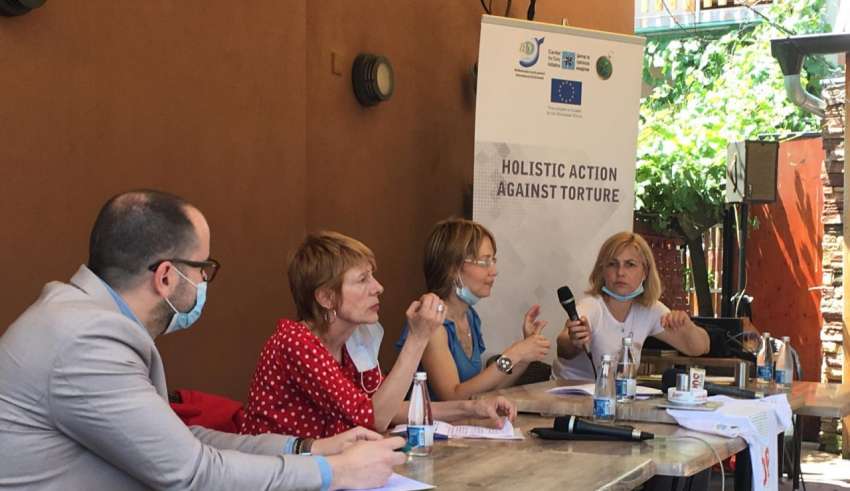 On June 26, the International Day in Support of Victims of Torture was marked in Nis. On this occasion, IAN and Center for Human Rights in Nis organized three events within the project Holistic Action against Torture, which is supported by the European Union.

The first in a series of events – the street performance “Path in Support of Victims of Torture” was organized as a musical-scenic performance which shows what people who suffer from various forms of psychological and physical violence go through, in order to draw public attention to the importance of supporting victims of torture.

The artistic performance was followed by a press conference organized in the open air, in the garden of the cafe “Na ćošku”. Jelena Lončarević, project manager of IAN, Lidija Vucković, director of the Center for Human Rights Niš and Miroslav Stanojević, lawyer of the Center for Human Rights Niš, addressed the journalists. Speakers stressed the importance of respecting international conventions and standards in the fight against torture and called on victims to turn to the two organizations for help.

In the evening, a screening of the documentary film “Reminescence” by Radoslav Ćebić was organized at the Niš Cultural Center, as well as a discussion about the film and the author. The film most directly presents our users, victims of torture, who have experienced various types of torture in war and peace, and reminds us of many forgotten traumas, events, injustices, violations of the law and violations of human rights. The conversation about the film and the tragically deceased Ćebić was led by Biljana Petrović, the executive director of IAN, Filip Švarm – the editor-in-chief of the weekly Vreme, Momir Turudić – the assistant editor-in-chief of the weekly Vreme. The moderator of this work was Dejan Dabić – film critic, editor of the NKC film program.

Urgent Appeal to the UN Special Rapporteur on Torture